When the musicians behind Columbus band The Devil Doves take their act out of town, they follow a road-trip ritual. One of the guys will choose a song – any song – and they’ll pull it up on YouTube to listen to it. The DJ role rotates around the car after each song.

The quartet takes a similar approach to songwriting, toeing the line between an eclectic and a signature sound. The process often begins with Timothy “Junior” Kauffman and an idea for a melody. “With a lot of our writing, when Junior brings the stuff to the table, we all have different ideas,” bassist Eric Nassau says. “Kyle’s (Davis, trejon) got beats. Jeff’s (Straw, keys) got melody lines. I’ve got rhythmic aspects.”

Who Do You Think?
Influenced by artists ranging from Tom Waites and the Pixies to the Violent Femmes, The Devil Doves’ rough-and-tumble style of rock will likely have you tapping your toes. The group stopped by the WOSU studios to perform their “good old love song,” “Who Do You Think?”

“I’m going through that with my family right now. And everybody’s got their own stories with that, but it’s hitting especially home for me right now. ‘The Girl With No Face’ is probably as classic Devil Doves as you can get,” Kauffman says.

Plain To See
“‘Plain To See’ is kind of the most overtly political song that I’ve ever written,” says Timothy “Junior” Kauffman. “I don’t know if you’ve noticed this, but people are getting a little political right now. I can’t imagine why. It’s a strange time. And you know, I kind of feel the way I do and had a good idea about it, and so I wrote about that. And I think it came together well.”

He says, “That’s one that we literally just finished, and I don’t even know that we’ve ever played it live (until now, in the Broad & High studios). That was our first time.” From: Worthington
Influences: “Specifically for me, as the principal songwriter, I would say like Tom Waits, the Violent Femmes – because of the instrumentation of that – a guy named David Lowery, who did Camper Van Beethoven and Cracker. We cover a lot of their songs just for fun.”

From: Connecticut
Influences: “The Pixies, Black Flag, Black Francis. It goes on and on.”

From: Pittsburgh
Background: “I went to school at Capital, got a degree there and then just liked the city so I stayed around. I got a degree in music technology and piano performance.”

On Forming the Band

Eric: I came to Ohio Wesleyan University and graduated with an art degree with a theater minor. I lived in Delaware (Ohio) for a couple years after that and then moved to Columbus and got involved with the music scene here. And that’s how I ran into Junior and Kyle. So they were a band (under the same name) from, like, 2010 on.

And then I joined in 2012, basically by, I was listening to a demo of theirs and I learned all the songs on my own and let them know that they needed a bass player. And I showed up to a gig at Brothers Drake with my equipment.

Kyle: We were friends.

Junior: I was so new to it at that point, I was like, is this going to work?

Junior: But Eric has been playing for so many years around town and has basically schooled us on how to figure out how to navigate this thing. And of course, I had no idea at the time. And it turned out to be wonderful.

Eric: We played around together as a trio for a few years. We played a regular gig at the Three-Legged Mare every Thursday – even before I joined the band, they were doing it. And that lasted about three years or something.

Jeff: That’s where I met you guys. I ran sound for them twice there, I think, covering for a friend. And then a few months later, we played a house party together, and I opened for them. And then they asked me to come sit in with them a few times after that. I was doing solo stuff that night, but I was playing in other bands at that time, too.

Eric: He played with our good friends, The Jeffs – a band called The Jeffs who we’re very close with.

Junior: We did our best to poach him, but it’s all very gracious now.

Kyle: All it took was a cake.

Jeff: It was a good cake.

Kyle: It was my first cake that I ever made. My first cake ever was for Jeff to join the band. It was chocolate on chocolate – chocolate icing, chocolate cake, red lettering that said Devil Doves. Eric: When we are not performing, we are changing the world. Changing our own world, all the time.

Junior: We all have friends and family, and that’s what drives us. When we’re not performing, we’re hanging out.

Jeff: The first thing I would come to is Rambling House because a lot of people, every time I mention it, there’s at least someone who doesn’t know what it is.

Kyle: Man, that’s good. I used to live down the street and eat it every day for lunch.

Jeff: It’s in the parking lot of 14-O on Hudson. It only does cash, but it is a solid taco truck.

Eric: The bike path, the rock quarry – those are hidden gems for me.

Eric: One of my favorites is Aab India.

Kyle: I was always a Hounddog’s guy myself.

Junior: Hamati. It’s a Greek place. Shawarma, gyros – it’s the best thing in the world. I went to high school with those guys.

Eric: Pineapple pepperoni is the pizza.

Junior: It ceases to be pizza if pineapple is on it.

Kyle: I mean, I’ll do it, but it’s not my favorite. But I’ll tell you what, I made some beer brats and then put sautéed onions and pineapple on the beer brats. That was delicious.

Junior: I like the disagreements in the band. It keeps it interesting.

"Who Do You Think?" by The Devil Doves 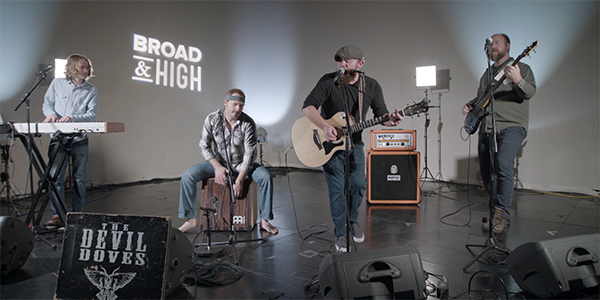 Web Exclusive: "The Girl With No Face" by The Devil Doves

"[It's] just about what you go through growing up and being an individual," says vocalist and guitarist Junior Kauffman. 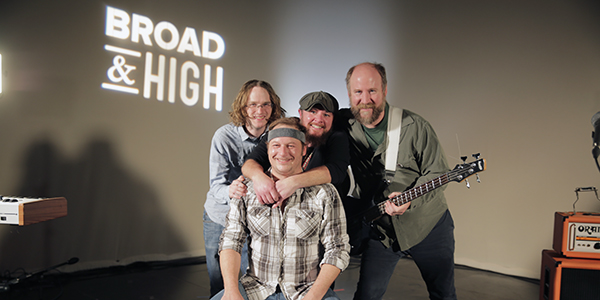 With two albums down and a third in the works, The Devil Doves stopped by our studios for a three-song performance and an interview. 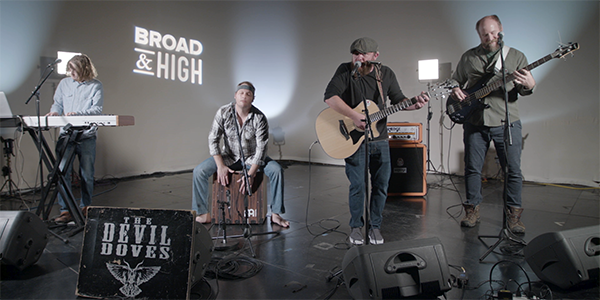 Web Exclusive: "Plain To See" by The Devil Doves

"'Plain To See' is kind of the most overtly political song that I’ve ever written," says vocalist and guitarist Junior Kauffman.