Hilda Doyle has been singing and performing in Central Ohio for more than 50 years, and it has always been a family affair. She started performing as a duo with her brother in 1968, and her daughters Heather and Stephanie began joining her when they were young children in the 1970s.

In 2001, mother and daughters formed the Ladies of Longford (with Elizabeth Blickenstaff coming on in 2003), putting contemporary twists on traditional Celtic music.

Baron’s Heir
Ladies of Longford take joy in putting a contemporary spin on old songs. They stopped by the WOSU studios to perform their version of “Baron’s Heir,” a Scottish ballad that dates back to the mid-1800s.

When I Was a Young Girl
This Irish-English folk ballad is from their 2009 album, Unreel, and concludes with a traditional Irish reel. Fave local venues: “We love Byrne’s Pub, and we love Fado and the Shamrock Club and all the Irish organizations that continue to have us year after year. We also love Natalie’s, and the festivals have been good to us as we come back year after year. We love them all in different ways.”

From: Clintonville
Resides in: Dublin, Ohio

From: Clintonville
Resides in: Upper Arlington

From: Bexley
Resides in: Louisville Hilda: Being moms, in general, which covers all of those. All those jobs your mom doesn’t get paid for.

Hilda: I eat out a lot. My favorite restaurant in Columbus is G. Michael’s. And they’re also my favorite happy hour.

Stephanie: My dad would say Tommy’s Pizza in Upper Arlington, on Lane.

Elizabeth: Hot Chicken Takeover is also. The Grill & Skillet in Bexley is also fantastic and a complete hole-in-the-wall. Bexley natives call it the Kill & Grill It.

Heather: Not my favorite, but I will eat it.

Hilda: Not anything I’ve ever tried. I’ve never ordered it because I just don’t think it goes that way.

Heather: I truly am in an in-between spot. Now if you ask me about anchovies, I would say yes to anchovies.

Elizabeth: I would say yes to anchovies.

Hilda: Yeah, three out of four yeses on that. More inclined to eat anchovies than pineapple.

Heather: That’s what’s so cool about this music, is that you can put a contemporary spin on these old songs and really not lose that history, either. So you’re freshening it up for the people that are here, listening. But at the same time, you’re bringing that history with you, into the present. So I really love that about traditional Irish music when we put this little spin on it.

And that’s kind of what we do a lot, is take a song that is very traditional and mash it up with a song that’s even from right now or put our own spin on it and make it – Hilda-ize it.

Hilda: I’m often coming up with the arrangements, although we never play a song the same way twice. There are little nuances that change with every performance.

People ask me, what kind of stuff do you do? And when you say Celtic music, most of ’em don’t even know what you’re speaking of, you know. But it does cover, like, the Irish and the Scottish and the Welsh, and you know, lots of them have those different backgrounds. But what we’re doing, I’ve always called it contemporary Irish. It’s almost like Celtic fusion.

The music is so familiar. So you have to give it some kind of punch and a little different style because a lot of the other bands that are Celtic bands are doing a lot of the same material.

Stephanie: Sometimes we do a mash-up with a contemporary song – maybe more mainstream, popular music. And also we’ll put things that are normally in a major key into a minor key or vice versa to kind of give it a different feel.

Elizabeth: And I think, when you’re talking about playing traditional tunes, traditional musicians definitely have a specific way of playing and a specific tuning. Hilda, oftentimes, will add a more jazzy –

Hilda: I use jazz chords and rock chords and bluegrass feel. It is a total mix of all those genres. But the Irish music is so versatile just in its flair, you know. Elizabeth can play, like, sometimes I’ll ask her to change up the tempo a little bit, you know, which she can do at the drop of a hat. And she does that even as we perform. She can do it, and we all follow her. We’ve all played so long together.

Stephanie: We never have any written music in front of us onstage because we prefer to play by ear.

Hilda: Well you know, lyrically we remain true to the song. But instrumentally, we put our own just soul into it – not just interpretation, but our own soul and emotion into it. And each one of these girls does that.

"When I Was a Young Girl" by Ladies of Longford 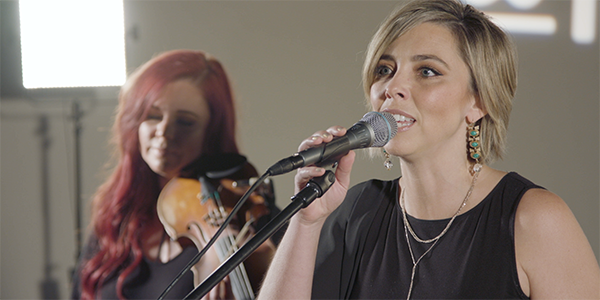 "Baron's Heir" by Ladies of Longford 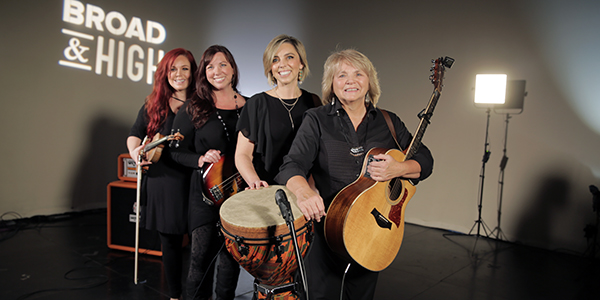 Meet the Ladies of Longford

The Ladies of Longford recently visited the Broad & High studios to share their music and more about their family band.