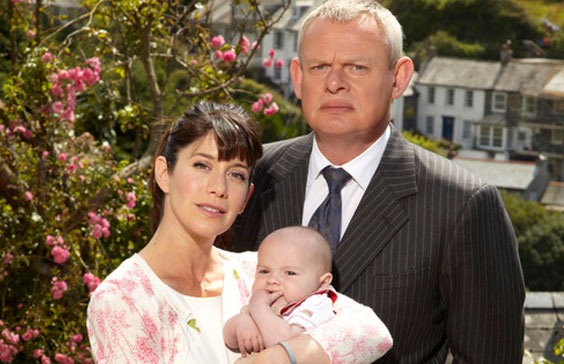 In the fifth season of Doc Martin, the irascible Dr. Martin Ellingham (Martin Clunes) puts his move to London on hold as he and local schoolteacher Louisa Glasson (Caroline Catz) adjust to life as new parents.

Episode Descriptions
Preserve The Romance | Thursday, April 6, 2017, at 9pm on WOSU TV
Dr. Martin Ellingham is struggling to come to terms with fatherhood. The baby boy born to him and his estranged partner, Louisa Glasson, is about to change their lives dramatically. Doc Martin had planned to resume his high-flying career as a consultant in London. He had packed his bags and moved out of the surgery to make way for the new GP, Dr. Di Dibbs (Joanna Scanlan). However Dr. Ellingham begins to have serious doubts about the competency of the new GP after she misdiagnoses a patient, and dishes out prescriptions for totally inappropriate drugs.

Dry Your Tears | Thursday, April 13, 2017, at 9pm on WOSU TV
With the departure of Dr. Dibbs, Dr. Ellingham moves back into his old surgery, agreeing to stay for a couple of months until a replacement can be appointed. Determined to get to grips with fatherhood, he asks Louisa to move into his house so he can help to raise their child. He even suggests that Louisa and still un-named “baby” could move to London with him.

Born with a Shotgun | Thursday, April 21, 2017, at 9pm on WOSU TV
Sleepless nights are taking their toll on Martin and Louisa. Tempers are frayed as they try to find ways to comfort their constantly wailing baby. Aunt Ruth has problems of her own: She is dealing with an intruder on the farm who has stolen the hub caps from her car.

Mother Knows Best | Thursday, April 27, 2017, at 9pm on WOSU TV
It’s Portwenn Fun Day and the village is buzzing with excitement about this major fund raising event. P.C. Penhale is in his element rallying the runners and whipping up support. The event sparks culinary rivalry between Bert Large (Ian McNeice) who runs Large’s restaurant with son Al (Joe Absolom) and Mark (Tim Goodman Hill), the landlord of the Crab and Lobster pub. Louisa’s mum Eleanor (Louise Jameson) arrives in Portwenn unexpectedly and Louisa is far from happy about her arrival. She hasn’t seen her mother for years, so why the sudden interest?

Remember Me | Thursday, May 4, 2017, at 9pm on WOSU TV
P.C. Joe Penhale (John Marquez) has an unexpected visitor — his ex-wife Maggie (Julie Graham). She appears to have completely forgotten that they split up a couple of years ago. When he tries to tell her they are no longer married she accuses him of over-reacting, and wants to know why he packed his bags and left her.

Don’t Let Go | Thursday, May 11, 2017, at 9pm on WOSU TV
P.C. Joe Penhale is desperate to keep Maggie and show her he’s changed; that he’s the macho husband she wants. But Maggie plans to return to Bude. Penhale resorts to desperate measures to convince her to stay, including surreptitiously paying people to be nasty to her so he can step in and assert his authority, and show her he can be tough. Aunt Ruth uncovers a chest of family heirlooms when she clears out a barn at the farm, including photos as Martin as a six-year-old schoolboy.

Cats and Sharks | Thursday, May 19, 2017, at 9pm on WOSU TV
Bert Large’s restaurant business is in financial trouble. He can’t even afford the food and drink for a charity event to raise money for Florence Dingle’s (Anne Reid) cat sanctuary. Mrs. Dingle is distraught. She desperately needs the money to continue to look after the cats and kittens in her care. Eleanor comes to Bert’s rescue with a plan to boost business at the restaurant, suggesting they have a Spanish theme night to attract customers.

Ever After | Thursday, May 26, 2017, at 9pm on WOSU TV
Mrs. Tishell’s (Selina Cadell) long-standing crush on Dr. Martin Ellingham takes a dramatic turn in this final episode in the series. Fuelled by a cocktail of drugs Mrs. Tishell can no longer hide her unrequited love for the doc, and decides she must take drastic action. Her husband Clive (Malcolm Storry) arrives back unexpectedly from his work on the oil rigs announcing his intention to retire so they can spend more time together. It’s now or never for Mrs. Tishell to make her romantic notions of a relationship with the doc come true.