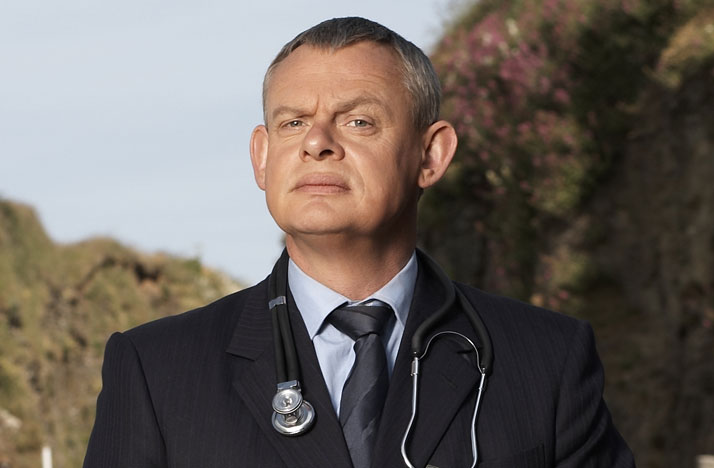 In the fourth season of the international hit series Doc Martin, Dr. Martin Ellingham (Martin Clunes) attempts to return to his former career as a surgeon in London, but his phobia of blood proves difficult to overcome. Things are further complicated when his on-again, off-again love interest, local schoolteacher Louisa Glasson (Caroline Catz), comes back to Portwenn with some surprising news.

Better the Devil | Thursday, January 19, 2017, at 9pm
Life in the beautiful Cornish village of Portwenn has become ever more infuriating for Martin since the heart-wrenching decision to call off his marriage to local headmistress Louisa. Louisa has left, and Martin has begun to question what keeps him in Cornwall. It’s certainly not his relentlessly annoying patients. On a visit to the hospital, Martin is stunned to meet Edith, his old girlfriend from medical school days who is now a top-ranking doctor with a flourishing private practice.

Uneasy Lies the Head | Thursday, January 26, 2017, at 9pm
Martin struggles to deal with the news of Louisa’s pregnancy. But Louisa is adamant that she does not want Martin involved. She is hired to teach at the local school, but the Headmaster is acting strangely. He has an arm that rises up into the air without him seeming to notice it! The Headmaster comes to see Martin about his constipation, but starts acting in a paranoid manner. Martin notices his strange physical behavior for the first time, but before he can complete his examination, the Headmaster rushes from the surgery.

Perish Together as Fools | Thursday, February 2, 2017, at 9pm
Martin is shocked to find Louisa and Aunt Joan knocking at his door before his office has opened. Louisa has had a medical scare and wants Martin’s reassurance that everything is fine. P.C. Penhale, still officially the world’s worst policeman, has an unexpected visitor — his older brother Sam.

Driving Mr. McIynn | Thursday, February 9, 2017, at 9pm
Martin is called to Louisa’s new home after she has a dizzy spell while shifting furniture. Martin urges her to slow down, but is shocked to learn that Louisa has applied to be her school’s head teacher again. Aunt Joan is involved in a car crash with the McLynns, an elegant elderly couple. When P.C. Penhale rushes to the scene and tries to impose his authority, he is ignored by both drivers.

The Departed | Thursday, February 16, 2017, at 9pm
Martin is in London to meet with Robert Dashwood, who is leading the selection process for the prestigious London surgeon’s job that he has applied for. Pleased that Martin has finally conquered his debilitating blood phobia, Robert is confident that Martin will be hired.

Midwife Crisis | Thursday, February 23, 2017, at 9pm
Martin meets Portwenn’s new midwife, Molly, who will be looking after Louisa. Martin is dismissive of her profession, and the two of them do not hit it off. Martin finds that cognitive behavioral exercises are a great help with his blood phobia and he is able to take blood from P.C. Penhale without reacting. Martin visits Aunt Joan at her farm, and breaks the news that he is intending to become a surgeon in London again.

Do Not Disturb | Thursday, March 2, 2017, at 9pm
To solve her farm’s money problems, Aunt Joan starts a small bed-and-breakfast business. Her first guest, unexpectedly, is another local farmer, Ted, who has also got into financial difficulties. Initially they’re a good match, but Joan soon finds that Ted is far from the perfect guest.

The Wrong Goodbye | Thursday, March 30, 2017, at 9pm
Martin and Pauline are surprised by the number of patients coming to see him on the last day before his Surgery closes and he moves to London. Taxi driver Tommy delivers a patient to the surgery, but complains of migraine headaches himself. Martin checks him for any serious brain conditions, and tells him to make an appointment with the new doctor if the headaches continue. Louisa goes into premature labor.