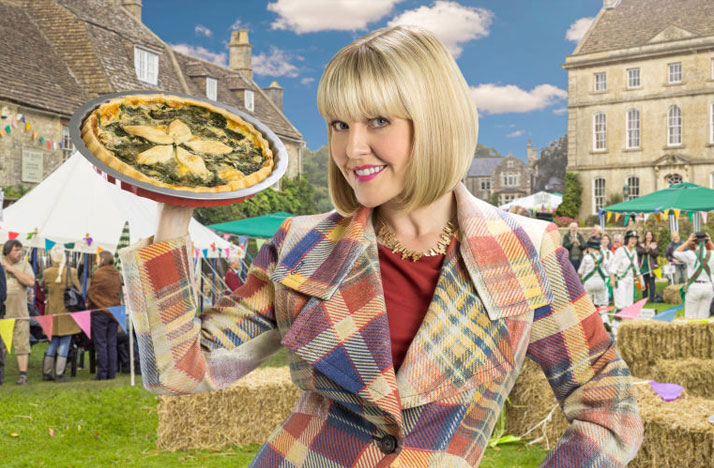 Agatha Raisin, a London PR whizz seemingly has it all – with money no object, an executive riverside flat, and a career in PR to die for – but her professional achievements have come at an emotional cost. Dreaming of a more peaceful existence away from it all, she opts for early retirement in the Cotswolds, only to find herself immersed in variety of mysteries.

Watch the comedy-drama series based on the novels by M.C. Beaton at 6pm Sundays on WOSU TV.

The Walkers of Dembley | Sunday, June 17 at 6pm
When militant rambler Jessica Tartinck is found bashed to death in a field, former PR whiz Agatha Raisin is forced to go undercover to get to the bottom of the grisly crime. Watch Preview.

Hell’s Bells | Sunday, June 24 at 6pm
A rich newcomer to the village, Amanda Ballard, has found little favor among the Carsely locals. And when her body is found hanging from the bell ropes of the church in an apparent suicide, Agatha suspects foul play. Watch Preview

The Wellspring of Death | Sunday, July 8 at 6pm
A village-wide squabble in Ancombe over the selling of water rights results in the death of Parish Council Chairman Robert Struthers. Agatha, on a PR job for the water company, tries to put the matter out of her mind. But as the body count rises, she finds herself drawn into the fray. Watch Preview.

The Potted Gardener | Sunday, July 15 at 6pm
Mary Fortune, a seemingly perfect paragon of village life, is found murdered in her own back garden. As shockwaves reverberate through Carsely, a series of bizarre garden sabotages may hold the key to Agatha unlocking the secrets of the murder. Watch Preview.

The Day the Floods Came | Sunday, July 29 at 6pm
Young bride Kylie Stokes is found dead, her body apparently drowned in a flash flood in the area. But as horrid details surrounding her death come to light, Agatha, who had seen the bride in some dismay on her ‘happy’ day, resolves to crack the case herself.

The Witch of Wyckhadden | Sunday, August 5 at 6pm
Ditching Carsely for the vast Wyckhadden Hotel to escape personal embarrassment, Agatha finds herself in the centre of another scandal when local ‘witch’ Francie Juddle is discovered bludgeoned to death. Trapped in the area until the matter is resolved, Agatha begins her own investigation.

The Murderous Marriage | Sunday, August 12 at 6pm
When Agatha’s ex-husband Jimmy Raisin returns to Carsely unannounced, it tests her relationship with James Lacey to its snapping point. And when Jimmy ends up dead in a ditch, Agatha is put in the frame for his murder.