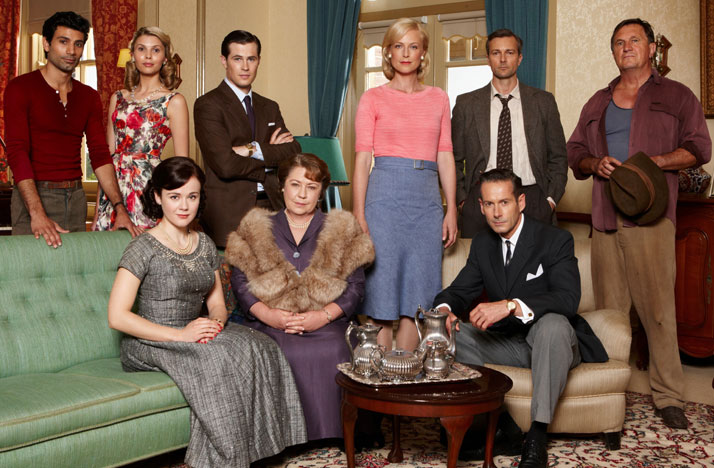 The cast of A Place To Call Home Season 1.

A Place To Call Home is a sweeping romantic drama that centers on enigmatic nurse Sarah Adams (Marta Dusseldorp) as she returns to her native Australia after two decades in Europe.

Estranged from her mother and carrying the secrets of her wartime experiences, Adams becomes involved in the lives of the Blighs, a wealthy pastoralist family. When Sarah unwittingly discovers a potentially scandalous Bligh family secret, her future becomes forever linked with theirs.

Watch A Place To Call Home Saturdays at 10pm on WOSU TV.

The Prodigal Daughter | Saturday, October 14 at 10pm
It’s 1953 and the horrors of World War II are still raw and alive for many. Nurse Sarah Adams learns of the death of her half-brother and returns to Australia from London to care for her estranged mother. Working her passage home aboard an ocean liner, Sarah becomes involved in the lives of the Blighs, a wealthy Australian family. When Sarah unwittingly discovers a potentially scandalous Bligh family secret, her future becomes forever linked with theirs.

The Welcome Mat | Saturday, October 21 at 10pm
While Olivia remains feeling unwell and disconcerted by James’s continued distance, it’s Elizabeth who’s the most put out — irritated by the fact that Sarah continues to be the talk of the dinner table. Meanwhile, in an effort to separate her social status from the Blighs, Sarah places an unsuspecting Roy between she and the wealthy family. Elizabeth is clearly unimpressed, but the simmering hostility takes a back seat when Olivia’s health takes a turn for the worse. Watch Preview.

Truth Will Out | Saturday, October 28 at 10pm
Sarah’s annoyance at the invasion of her privacy turns to anger when she’s questioned by Jack about what was discovered in her room: the fact that Sarah is not her real name. She refuses to answer his questions, unwilling to be drawn into a defense of her character when she is the one who has had her privacy invaded. When Jack persists in demanding an explanation, Sarah does the one thing he never would have expected: she quits. Watch Preview.

The Mona Lisa Smile | Saturday, November 4 at 10pm
The horrors of the war cast a long, unwelcome shadow over Inverness as Jack heads about the town with Sarah on her first day at work. The past haunts Olivia in a different way. Unable to stop wondering about the woman James admitted to loving in Europe, Olivia searches for any memento he may have kept of her. She soon makes the shocking discovery of who the person he loved really is. Watch Preview.

Day of Atonement | Saturday, November 11 at 10pm
With a religious occasion approaching, Sarah performs a spiritual cleansing in the local creek that’s unfortunately witnessed by Doris Collins. But while Sarah finds it hard to deal with Doris’s reaction to her nudity, it is Sarah’s own, personal demons with which she most struggles. Watch Preview.

That’s Amore | Saturday, November 18 at 10pm
Anna and Gino’s romance continues to blossom as they sneak off to spend time together, although it’s clear that something about their secret trysts is resting heavy on Gino’s mind. At Ash Park, Olivia and James’s relationship is at breaking point as Olivia struggles with the identity of James’ lover. Watch Preview.

Boom! | Airdate to be determined
Receiving word that her mother is gravely ill, Sarah gets a lift to Sydney with George and Anna. Elizabeth takes the decision to reveal her deepest, darkest secret in the hope that it can help James and Olivia see that there is hope for their marriage. Sir Henry Swanson asks George to receive a Japanese trade delegation at Ash Park. Watch Preview.

Worlds Apart | Airdate to be determined
Elizabeth is rushed to the hospital where Jack confirms she has suffered a heart attack. Jack tenderly looks after Elizabeth as she recovers. Heavily sedated and rambling, Elizabeth comes close to revealing a secret of her past. Elizabeth’s frail health leads Anna and Gino to postpone telling their families about their relationship; however, when Carla finds Anna’s contraception hidden in her room, she becomes suspicious and confronts Gino. Watch Preview.

Cane Toad | Airdate to be determined
Sarah and George begin a secret affair and start meeting at the cottage for their romantic trysts. Anna attempts to subtly push her father towards Sarah, hoping that if she can get them together, he will be more open to learning about her relationship with Gino. However, she is frustrated by the arrival of her aunt, Regina. Meanwhile, James continues to struggle with his emotions as both he and Harry play down their feelings for each other. Watch Preview.

Lest We Forget | Airdate to be determined
On the eve of Remembrance Day, George is asked to host a Japanese trade delegation. Knowing how the community will feel, George asks Jack to come to the reception in the hope that the approval of a former Japanese POW might help deal with any ill feeling. When Sarah and Regina cross paths at the reception, Regina is openly hostile and Sarah realizes she is up against an all too familiar and formidable foe — anti-Semitism. Watch Preview.

True to Your Heart | Airdate to be determined
Newly discharged from the hospital, Elizabeth is unimpressed by the way Regina is behaving towards George and asks her to leave. With tension in the house and James’ secret, growing feelings for Harry, Olivia and James agree that the best chance for their family rests in the city. Watch Preview.

New Beginning | Airdate to be determined
George is delighted when Sarah agrees to marry him. But when Elizabeth discovers her threat to disinherit George has backfired, she resolves to take a different approach. Meanwhile, Anna encounters complications with her pregnancy. Before James and Olivia leave Ash Park, he goes to visit Harry to say goodbye. Watch Preview.

Secret Love | Airdate to be determined
James sees a psychiatrist who agrees to treat his sexuality but James and Olivia’s hopes of a brighter future are challenged when George arrives and confronts his son. Anna is relieved when Gino believes that she miscarried and together they grieve and pray for their lost child. They decide to spend the night together at the cottage before telling their families of their intention to marry. Watch Preview.