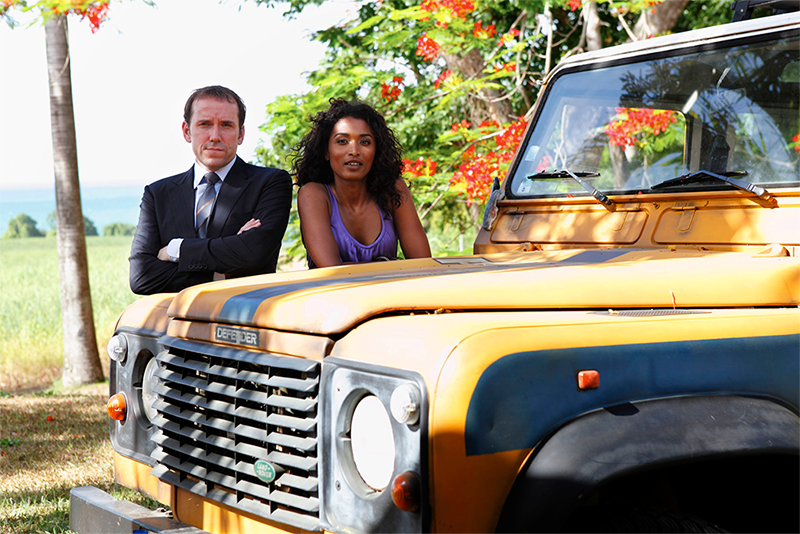 For a detective who can’t stand sand, even paradise can be annoying.

DI Richard Poole is still trapped on the stunning Caribbean island paradise of Saint-Marie – and for him the sun, sea and sand still continue to irritate, just as he irritates his long-suffering colleagues. But, he’s also as brilliant as ever. His eye for detail, relentless logic and stubborn refusal to leave anything unexplained works seamlessly with the instinctive and insightful knowledge of the beautiful Sergeant Camille Bordey.

Episode 1 | Saturday, January 23, 2016 at 9 pm
DI Poole’s learning to cope with the tropical climate and laid-back atmosphere of Sainte-Marie, but every day still presents a challenge for the traditional detective. When the owner of a former sugar plantation, Roger Seymour, is discovered with a machete in his back, Poole and his team have a seemingly impossible case to solve.
Watch Preview

Episode 2 | Saturday, January 30, 2016 at 9 pm
When a young nun is found dead in her smoke-filled bedroom, DI Richard Poole and his team are soon on the scene. What seems like a tragic accident caused by a lit cigarette soon turns into a murder investigation when Richard deduces that the nun didn’t smoke the cigarette that killed her. But with her room locked from the inside, how could anyone else from the convent have committed the crime?
Watch Preview

Episode 3 | Saturday, February 6, 2016 at 9 pm
A body found floating in the pool of a luxury cosmetic clinic presents a complex case for DI Poole’s team. Everything points to suicide – the victim was going through a difficult divorce and the team find an empty pill bottle in her room. But Richard is not content with this hypothesis. How could the victim have drowned herself? And why would she make a cup of the world’s most expensive tea yet only drink half of it? There is only one conclusion – Valerie Dupree was murdered.
Watch Preview

Episode 4 | Saturday, February 13, 2016 at 9 pm
DI Poole and the team are plunged into a mysterious plot of pirates and ancient myth when a treasure hunter is shot dead in the jungle. On the island to track down the fabled buried treasure of the legendary pirate, Le Clerc, the seemingly harmless group of treasure hunters are shocked when geologist, Dr Ian Parks, is brutally killed in leader, Daniel Morgan’s, tent.
Watch Preview

Episode 5 | Saturday, February 20, 2016 at 9 pm
Camille is devastated when her best friend, Aimee (played by Jamelia), a singer on a Caribbean party boat, collapses while on stage during a night of music and cocktails. Struggling to breathe, Aimee shockingly dies in Camille’s arms. It seems she has been poisoned.
Watch Preview

Episode 6 | Saturday, February 27, 2016 at 9 pm
When an English tourist is found dead in her luxury villa, strangled by her own scarf, the crime scene initially indicates a robbery gone wrong. However, shrewd Richard notes that the situation is eerily similar to a case he heard about back in London.
Watch Preview

Episode 7 | Saturday, March 26, 2016 at 9 pm
As Hurricane Irma approaches Saint Marie, the islanders are battening down the hatches. However, while everyone else is taking cover, the team are called to the murder scene of a young meteorologist, Leo Downs.
Watch Preview

Episode 8 | Saturday, April 2, 2016 at 9 pm
When a shot is fired at a charity fundraiser, host Malcolm Powell is found dead in his study. Malcolm’s PA, Vicky is certain she knows who the culprit is – a mystery man named Jack Roberts who had an appointment with Malcolm and was seen arriving and then fleeing the scene of the crime. However, when Richard and his team pursue the suspect, they find his abandoned car nearby with no clues as to his whereabouts or motive for killing Malcolm.
Watch Preview