In 2017, a few Columbus musicians really got into the spooky spirit of the season. Inspired by classic and campy scary stories, they formed “a Halloween punk band” called Emmy Lazarus and the Recently Deceased, paying homage to Beetlejuice’s Handbook for the Recently Deceased.

“I think the genre that we would fit into is kind of like ’60s garage rock,” vocalist Emmy Lazarus says. “That’s really what drives the music. And I think I would describe it like, ’60s rock meets The Munsters.

“So we’re not trying to be really, really scary,” she continues. “We’re trying to be fun and spooky and be a band that, you know, a lot of different people – even if you’re not really into the horror genre or scary movies – can feel like they’re having fun with.”

Guitarist Doctor Shockter says, “I think it’s just a real graveyard stomp that you can just kind of creep out on.”

The Werewolf
“‘The Werewolf’ is a song that derives itself in that classic, you know, werewolf genre. It’s really a song about a spooky werewolf that’s coming to get you,” says vocalist Emmy Lazarus.

“When I was a kid, I think the scariest thing I ever saw was: I was at my grandma’s house and with all my older cousins, and they were watching Silver Bullet. And it terrified me as a kid.” She finished, “So I’ve always been really fascinated with the werewolf story and the werewolf trope in the genre. And so we wanted to write a spooky song about it.”

Keep Halloween in Your Heart (All Year Long)
Columbus’ Halloween band Emmy Lazarus and the Recently Deceased returned to the WOSU TV studios for a seasonal encore, wrapping up our last new episode of 2018.

Emmy Lazarus says, “Despite being a spooky Halloween band, I also really love Christmas. So what I wanted to draw on were some of my favorite Christmas songs from the ’50s and the ’60s – that kind of style.” The character: “I’m the evil scientist of the band. It’s unknown whether or not I am in fact deceased or just ghoulish in nature. So essentially it’s my character’s job to keep the three dead characters in the band functional. And I do that through a series of very shady science experiments that involve harsh and possibly illegal chemicals, all while harnessing the electric power of lightning and the electric guitar.”

Fave local venue: “Ace of Cups. Marcy (Mays, owner,) is a successful musician, and she runs the club from understanding the point of view of both the musical act and the establishment, which makes for a much better experience for both sides.”

The character: “I wanted to pick something that I could be anonymous in — so I could sort of disappear behind the character — and also something that had that sort of classic horror movie feel to it. The main idea that came to me was, what if a mummy woke up and then went to, like, a skateboard shop to buy some clothes. And so that’s the look I was going for.”

The character: “I’m just a dead guy. One of the most important dead-guy zombies in history was the first zombie that showed up in Night of the Living Dead and was just random Dead Guy in a cemetery. He never got a name.”

Say it one more time, guys.

Dead Guy: Yeah, Tim Burton, Beetlejuice. A lot of that flavor is in the music and the vibe as well.

Emmy Lazarus: Well for me, if I’m not playing music, I am re-watching Friday the 13th movies. If we’re talking Freddy vs. Jason, I am Jason all the way.

Emmy Lazarus: Let’s say Studio 35. I freaking love that place. We love to watch Fritz the Nite Owl at Studio 35. They do late-night, campy B movies. They also host Bad Movie Nite, which is another feature we like to make time for. But in general, Studio 35, it draws on those classic movie houses. It has some good beers, too.

Imhotep Jones: I’ll give a shout out to Baba’s. It’s on Hudson and Summit (streets). It’s like a breakfast sandwich place, but they’re also doing dinner. They just started doing dinner recently. You can get, like, smoked ribs.

They’re great because the menu’s really small — I love a place where there’s only four choices, five choices. Really good hamburgers. But their breakfast sandwiches are really spectacular. And it’s just a really great mom-and-pop place. It’s a husband and wife who run it.

Emmy Lazarus: I love like ’50s- and ’60s-era diners, and there’s one in Upper Arlington that’s been there since like the ’60s. It’s called Chef-O-Nette.

Dead Guy: Honorable mention going out to the blood bank and the great hospitals in town. What is your band’s origin story?

Emmy Lazarus: It was in our basement, actually, our first show (on Halloween 2017). Eric and Corey are in a lot of different bands together, have been over the years. And I think they needed an opener for a show at our house. And we decided, like, why don’t we put together a fun little few campy songs? And that’s how it came together, really.

Imhotep Jones: Actually, from my perspective, they were having a Halloween party, and Eric (Doctor Shocktor) said costumes required. And I was just like, “I don’t know, man. I have a kid. I don’t know if I have time to get a costume together. Can I just show up?” He’s like, “Costumes required.”

And a couple days later, he comes into the lunchroom (at work), and he says, “We’re starting a Halloween punk band. Me and Emmy are doing it for the show. And I was like, “Uh, OK.”

And like five minutes later, I walked into his office and was like, “How do I get in on this band?” And he was like, “Well, you said you couldn’t even get a costume, dude.” I’m like, “I’ll figure it out.”

Who writes the songs?

Emmy Lazarus: I love telling stories, and I love coming up with a concept and working with Eric to figure out a melody sometimes to really put all the pieces together. But up to this point, I’ve been writing all the lyrics, and [Eric] and I work together to get the bones of the song put together. And then we’ll come together as a group and work it out. And that may change as the band gets some more time.

Where do you find inspiration?

Emmy Lazarus: I also love the horror genre of the 19th century – like the Victorian era, where we start to see Mary Shelley’s Frankenstein and Bram Stoker’s Dracula. It’s when we really come into this gothic horror concept. That is also an inspiration for some of the songs that I like to come up with.

Emmy Lazarus: Yeah! It’s like there’s always something lurking in the shadows.

Dead Guy: If punk rock suddenly showed up with people in hoop skirts and …

Emmy Lazarus: And pocket watches. … Something else that I haven’t mentioned is that my favorite movie is Beetlejuice. And our band name is kind of inspired by that movie and the Handbook for the Recently Deceased that they have. And so that’s where the (band) name came from.

Despite being a Halloween band, you also have a Christmas song. What was the inspiration for Keep Halloween in Your Heart?

Emmy: Well, despite being a spooky Halloween band, I also really love Christmas. So what I wanted to draw on were some of my favorite Christmas songs from the ’50s and the ’60s – that kind of style.

I was really channeling the film White Christmas with the aesthetic. For my dress, I was inspired by Rosemary Clooney in White Christmas. There’s this one scene where she has this long, black dress, and I wanted to have that Christmas aesthetic with a little darkness. So I wanted it to be a celebration of Halloween and, you know, could also work as a Christmas song.

For me, the song describes the feeling I had when I went to a few different stores the day after Halloween. The Halloween sections were starting to be taken over by Christmas stuff, but not quite – it was a weird mix of stuff.

Emmy: That’s something I feel like you always see with Halloween decorations – they’re always eclipsed by Christmas. And, you know, sometimes I feel like they need a little bit of room to breathe, too. So why don’t we allow it a little bit more space?

And that was what I was channeling for this as well. You know, we’re so quick to move straight into Christmas, and I love Christmas. But I also love Halloween, and I want to give it its due as well.

It also has a naughty-and-nice vibe to it.

Emmy: Yeah, that was what I was going for. I didn’t want to completely roast Christmas because I do really love the holiday. But I wanted to be like, yeah, well I like the cookies and the cakes. But what I really want are vampire teeth and skeletons and that sort of thing.

Do you think you’ll be writing any other non-Halloween holiday songs?

Emmy: You know, I think I’m just going to stick with Christmas and Halloween. It may be stretching it a little too far if we did, like, an Easter Song or St. Patrick’s Day song.

What’s really fun about our band is that we can kind of do this Nightmare Before Christmas aesthetic, as well. We can give Christmas its place within the spooky aesthetic.

Do you guys have any other shows coming up?

Emmy: We don’t. We are taking some time just to record and write right now. But maybe this spring we’ll have some shows on the docket.

"Halloween" by The Recently Deceased 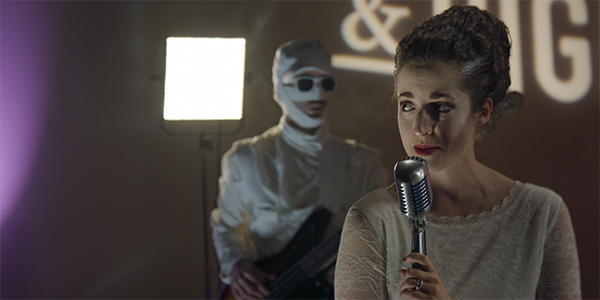 "The Werewolf" by The Recently Deceased

"I've always been really fascinated with the werewolf story and the werewolf trope in the genre. And so we wanted to write a spooky song about it." —Emmy Lazarus (vocals) 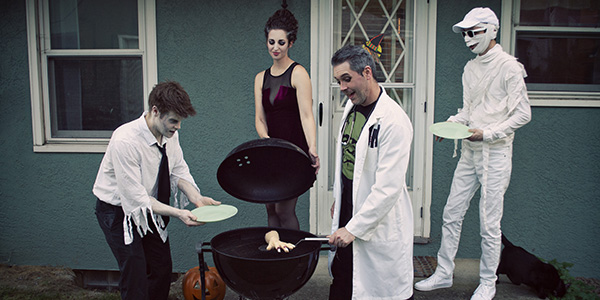 Meet the Undead Members of The Recently Deceased

We caught up with The Recently Deceased to get the backstory on the Halloween band and its cast of creepy characters. 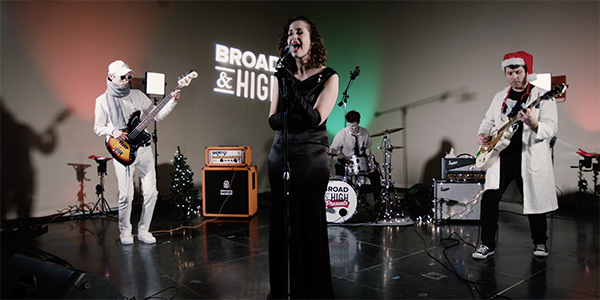 Columbus’ resident Halloween band, The Recently Deceased, is back this winter season to remind us how much they miss the spookier holiday.