T.Wong was born at the same time as Stefan Thomas’ law career. It was 2012. He’d just passed the bar exam and had already been recruited to work for local law firm Kegler Brown. But the musician inside him was getting louder. So after hours, he started experimenting at Parish Musical Arts Conservatory. From months of experimentation, his singer-songwriter persona T.Wong emerged.

Fast forward to today, and he’s putting the Thomas in Thomas Ingram Law Group, and T.Wong has two full-length albums and an EP under his belt. He produced his latest record, The Upside Down, with local musician Parker Louis in 2017.

The Upside Down
Our local music series continues with Columbus singer-songwriter T.Wong. “The Upside Down” is the title track off his most recent album, co-produced in 2017 with guitarist Parker Louis. And it’s no coincidence that they are fans of the Netflix hit Stranger Things.

The two of them joined us in the studio, accompanied by musicians Aaron White (piano), Le’Ron White (bass) and Jordan Lewis (percussion).

Beautiful Melody
“‘Beautiful Melody’ was actually a song I wrote a few years ago,” T.Wong says. “I produced that with Renee Dion, who is an artist and producer here in the city. We created that for a performance. And I have started utilizing it again in my repertoire.”

Fave local acts: “Well, Renee Dion is by far one of my favorites. Parker Louis is incredible. He comes from Forest & the Evergreens. They took a hiatus, and he started his own project and brand. It consists of the musicians here, and then have background vocalists. Vada Azeem is one of my favorite artists. Honey and Blue is excellent. Jonathan Baker – he’s on the Christian inspirational.”

T.Wong: Reading. And then when we are not performing, if we’re all together, I would say we’re eating.
Jordan: Yeah, we are.

Are you reading for fun or reading, like, legal codes?

T.Wong: Actually, twofold. I just accepted a position as a professor at Otterbein. So I’m reading for the classes that I’m about to teach. But I read for fun. That is my pastime. I read, like, two or three books at a time. Like, how people watch TV is how I read instead.

T.Wong: Lalibela and Indochine are hands-down my favorite restaurants. Indochine is a Vietnamese spot. Lalibela is an Ethiopian restaurant.

Jordan: Acquired.
T.Wong: I’m not a pizza guy. I’ll eat pizza periodically but not really because I don’t do dairy. But I’ll do like Donatos wings or their subs.

On Writing and Inspiration

T.Wong: I think the process of mine is probably a little different because generally, my writing happens while I’m driving. My brother – we call him Big – he told me that, “I think it’s, like, a psychological thing where, when you’re doing something you’re used to doing, your brain can do other things,” or something like that.

Driving for me is just like riding a bike. So my brain frees up. That’s when I’ll hear, like, melodies or get lyrics. Sometimes I’ll get stuff in a dream, so I’ll wake up real fast and put it on my phone.

The inspiration generally is just from, I think what a lot of artists get it from – or I could be wrong; I don’t want to speak for anybody – but generally just from experience.

But actually, a lot of times, live-playing with [this band] inspires. The chords they’ll hit, especially if I’ll, like, jerk my body or make a sound that’s obviously not a singing sound – that is a trigger. I don’t know – Jordan, you can correct me – but for me, you can feel it.

Jordan: No, that’s pretty much it. It’s just hard to explain, that type of feeling. It feels really, really good, pretty much.

T.Wong: It’s like a vibration, a literal vibration – just really intangible. So I think that’s one of the beautiful things about playing with them over and over and over again. One, it matures me as a vocalist, whether they know it or not. But two, that sound starts to mesh, like, a lot more after so many times. And three, I start to reflect that sound into my disc or CDs or albums or whatever because it’s maturing into what I appreciate, what I like.

On the Newest Album’s Namesake

T.Wong: Me and Parker (Louis) were in the studio. We both love Stranger Things. There were some sounds Parker was playing with, and we were like, man, let’s go there. We said we would be really raw and not playing too much, so a lot of that’s really organic. None of it is written or any of that, so it’s, like, all on-site.

At some point during “LionvDragon,” he was, like, “Man, we should probably name this thing The Upside Down or something.” And I was like, eh.

And then after a day, I was like, let’s go for it. So it was really based off just the sounds. There are some darker tones. If you listen to “LionvDragon,” if you turn it loud enough or if you have a strong enough headphone, there’s the sound that’s like a Demogorgon sound in there that people wouldn’t know unless you really pay close attention.

But on the music side, it comes out a little bit more – I think just because it’s a small community. And so I think people are like, that’s the guy who’s also a lawyer. So it kind of goes hand-in-hand in that sense.

I’ve been fortunate enough that, on the music side, I’m actually facilitating sessions with the Lincoln Theatre, Ohio State – I’ve been to CCAD and stuff like that to actually speak on legalities and business in the arts.

Once people, kind of, heard about it a little bit, I started getting invites to come in and speak on how to protect your brand and how to, you know, establish your music enterprise more so than the performance side of it. So it bleeds over more and more.

"The Upside Down" by T.Wong 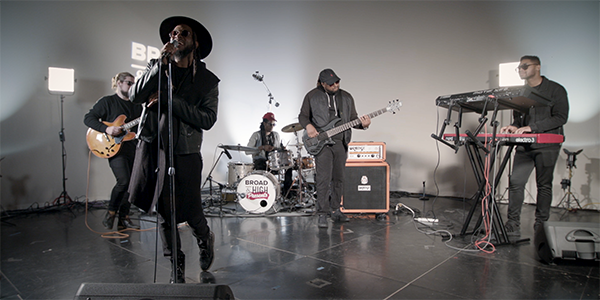 Web Exclusive: "Morning After" by T.Wong

Singer-songwriter T.Wong performs "Morning After" from his EP, 'Dreamin' in Motion.'