Having graduated from high school earlier this year, the four members of Columbus band Stems are each headed in different directions – with one going to school in Chicago, another California-bound and a couple staying local. Stems isn’t going anywhere, though. The 19-year-olds plan to reunite every couple of months, take their act on the road and record a follow-up to their album, Out of Fear.

Out of Fear
The teenage members of Stems describe their sound as “prog-hop” – a fusion of progressive rock and hip-hop, with some elements of jazz thrown in. The group stopped to give us a performance of the title track from their 2018 album, “Out of Fear.”

Chest Piece
This song is the first track from Stem’s 2018 album, CCC.

Callous
“Callous” is the second “C” from their album CCC. The album title comes from the three track names: “Chestpiece,” “Callous,” and “Charge.” From: Columbus’ East Side
Fave local act: Hidden Places
Influences: “So basically a lot of my music tastes is based on what my mom would play. She was really into like Kanye and Outcast. It’s mostly hip-hop and R&B for me. I listen to a dumb amount of Rihanna and Shawty – Shawty’s sick. People say I remind them of MF Doom, and to me, that’s a really good compliment. So I’m just gonna run with that.”

From: Gahanna
Fave local acts: “Swarming Branch, for sure. Ugly Stick is my girlfriend’s parents’ old band, and they’re crazy. They’re really good. They play every now and then – if you’re lucky. Radarhill.”
Fave local venue: “For environment, Cafe Kerouac. It’s our stomping grounds. We can always get people to go there. Sound-wise, we played at Rumba a couple times – it’s always real nice.”

From: Clintonville
Influences: “I listen to a lot of Rush, Red Hot Chili Peppers, The Who, Queen – some classic rock stuff. But also some other things, like Snarky Puppy and some BadBadNotGood every now and then. Basically anything that’s got a good bass player.” Zach: No, don’t say that! I’m thinking food. And I’m thinking chili because that’s a lot of things put together, and it just works so well every time. It’s warm; it’s spicy. But I’m just thinking about chili ’cause I’m hungry.

Dante: If we’re going with food metaphors, too, also maybe, if you like putting extra toppings on a frozen pizza.

Mickey: Just takin’ it all in.

Kendall: I feel that. Mood. Dante, you’re interesting. You’ve got to come up with an interesting answer.

Dante: I guess, like, right before rehearsal yesterday, I was helping my friend film a short. So I guess, filming.

Kendall: He cut his finger trying to catch a drone – he caught it.

Dante: I caught it. I saved it from going into a roof or –

Kendall: I just want everyone to know that Dante is of superhuman abilities. That’s why he wears the suit.

I was going to ask about the suit – if you came from a day job or usually wear it for the band.

Dante: Yeah, it’s just a thing that I do. ’Cause we have a song called “zootsuit.” And Mickey was like, “You should wear a suit for the performance.”

Mickey: That was [our] first show. It just happened, I don’t know. There was an instance where Dante forgot the suit, and his dad delivered us the suit.

Kendall: And this was like, when we were playing outside.

Mickey: Yeah, that was the ComFest show.

Zach: I feel like the taco truck on Hudson isn’t – that’s not hidden. People know about it. Shouts out Exotic Latino Grill. Open 24/7. They serve the hipsters of the Old North/Clintonville area. They’re killin’ it there. Five dollars for that big burrito.

Mickey: Oh, and Upper Cup. I’ve got to shout my work out.

Dante: I mean, Clinton-Como Park is kind of cool.

Kendall: I think my gem – and this might sound a little corny – but Downtown at night looks kind of fly to me.

Kendall: Zach makes some of the best bread ever.

Mickey: I’ve been trying to eat out less, but I’m going to say Dough Mama with that egg sandwich. That’s a really good egg sandwich, and I don’t even eat eggs like that.

Dante: I think Aladdin’s is one of my favorite restaurants. I usually get the chicken with the rice, but sometimes I’ll get the sultan’s pizza. I love falafel. The falafel there is good too.

Kendall: Honestly, all I eat is pizza and Wendy’s, so I’m not good at this. Shout out Upper Cup because they do make really good chai lattes.

Zach: Shout out Tyler’s Pizza & Bakery for showing me the ropes.

Mickey: Big yes for me.

Dante: Big no for me.

Dante: If you want salty and sweet, put sweet peppers on there – some, like, green bell peppers.

Zach: I mean, yeah, but pineapple!

On Starting a Band

Kendall: Basically, me, Mickey and Zach were all in the same grade (juniors), and Dante was a grade lower than us (about three years ago). So Zach and Mickey came up to me – we had this class at our school called band lab, and it’s basically, like, you know, you form together a band. You’re supposed to go out and get shows, write songs and everything. This is at the Arts and College Preparatory Academy.

So they told me next year, going into our senior year, to take the class so we could all make a band together. So I joined the class, got into it and, you know, us three knew we wanted to be in the band together. And basically we saw Dante play in the class and realized we needed a bass player, and Dante was really good. So we kind of recruited him.

Were you guys friends before that?

Kendall: Yeah, we were. (We hung out) a little bit.

Zach: I used to hate Mickey.

Mickey: And I thought Zach was a dingus. … Zach started wearing shoes sophomore year; Zach didn’t wear shoes freshman year. Kendall and I had art class together freshman year and kind of just messed around.

Kendall: When we weren’t doing anything, I would freestyle, and he would encourage it – even when it was low-key kind of bad. That’s kind of how we got to know each other a little bit.

"Out of Fear" by Stems 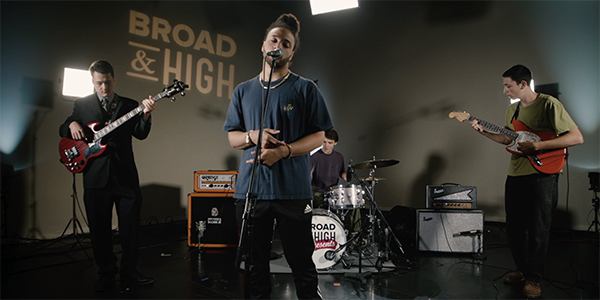 The Columbus musicians of the band Stems share their newest song, "Chest Piece." 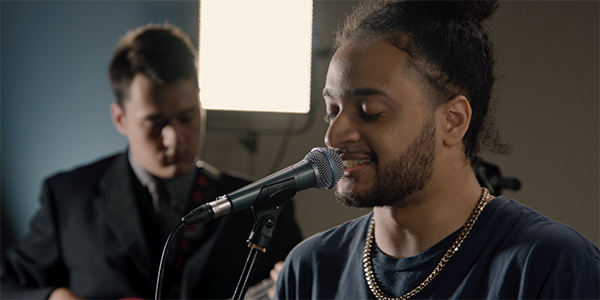 "Callous" is a new song by Columbus "prog-hop" band Stems. 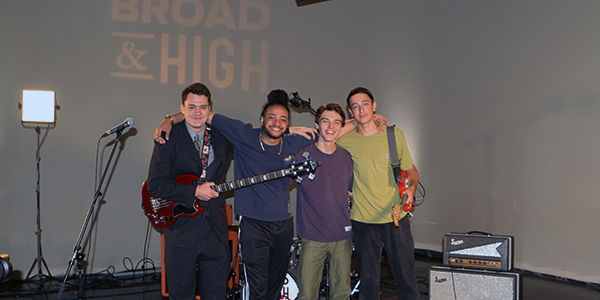 Meet the Musicians of Stems

We sat down with Kendall Martin, Mickey Shuman, Dante Montoto and Zach Pennington to learn more about Columbus band Stems.