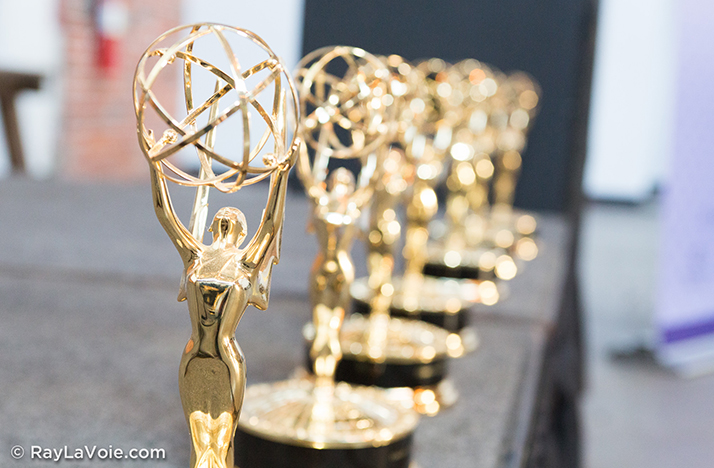 WOSU Public Media is excited to announce that WOSU TV has earned 10 nominations for the 2017 Ohio Valley Regional Emmy Awards. Winners will be announced at the Emmy Gala, Aug. 5 in Lawrenceburg, Indiana.

We received nominations for our shows Broad & High and Columbus Neighborhoods, as well as for WOSU Productions, our production service for external clients.

The Ohio Valley Chapter of the National Academy of Television Arts and Sciences serves 13 markets throughout Ohio, Indiana, Kentucky and West Virginia.

Here are the nominations we’ve received for 2017.

Our original weekly arts magazine show, Broad & High explores the character and creativity of Columbus and beyond. Watch at 8 p.m. Thursdays on WOSU TV.

Of the seven nominations in this category, Broad & High received three.

A graduate of the Columbus College of Art & Design, Keturah Ariel works in many mediums and makes a brisk business of printing her work on items from T-shirts and tote bags, to coffee mugs and greeting cards. Her work has frequently been featured in Essence magazine, and she tells us how she has turned her passion for art into profit.

These 48 decorated ostrich eggs are the culmination of a years-long project by Columbus lawyer and art collector Charles Bluestone. Dozens of artists across Ohio were provided an egg to use as a canvas, and the creativity they each brought to the form is striking.

Denny Griffith retired from the Columbus College of Art & Design in 2014 after serving as president for 16 years. An exhibition at CCAD’s Canzani Center featured new works by Griffith, showcasing surreal landscapes and biomorphic forms reminiscent of living organisms.

This segment premiered in January 2016, just five days before Griffith’s death. It aired again during a special memorial episode the following month.

In the last of the 12 Columbus Neighborhoods full-length documentaries, see how the immigrant experience not only defined the character of Columbus during its foundation and early growth, but find out how today’s immigrants are adding to our culture, supporting our economy and reshaping the American dream.

On this episode, explore how the food industry has helped shape Columbus, from innovative retailers and manufacturers to tasty bites. Watch the compelling stories behind Big Bear grocery stores, Worthington Foods, Bottoms Up Coffee Co-op and how Columbus became a test market.

Historian Doreen Uhas Sauer tells the story of Clintonville’s Walhalla ghost, an enduring tale that has many versions. (Plus, check out this behind-the-scenes video about the making of the segment.)

In your kitchen, in your car, at work or at play, WOSU Public Media is with you throughout the day. Get inspired.

The people who create art in Columbus have amazing stories. They are stories full of inspiration, challenges, passion and incredible successes. We believe knowing their stories will make you want to experience even more art all over our city. Art Makes Columbus and Columbus Makes Art.