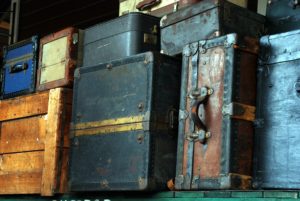 We’re drowning. Not in rivers, reservoirs or rainfall swollen streams, but drowning in stuff. We own so much stuff that we now park in the driveway instead of in our over-stuffed garages. ‘Chronic hoarding’ could now be covered by health insurance. The mall is more popular and populated than any library or church.

The late George Carlin addressed this theme in a hysterical monologue a few years back, bemoaning the fact that we now “…have stuff all over the world!”

Your house is still not big enough? Rent storage space for all that stuff. The amount of money Americans spend each year just storing extra stuff equals the combined city budgets of Columbus and Cincinnati. So called ‘extra space storage’ companies raked in $782 million in revenue last year renting us space for stuff we lack room in our homes for.

In 2015 we Americans spent $2.6 billion just for “public storage,” your tax dollars hard at work storing official stuff. As long as we’re on the topic, here’s a startling statistic: Again in 2015, we spent $211 million on U-Haul fees, not to move from our place of residence, but just to carry stuff to our storage units! We are drowning in stuff.

Why the essay on stuff? My wife and I are plumbing just how deep the Stuffy River is in our (relatively small) house, because we’re in the process of moving. And we’re not just moving across the street, or across the continent, and certainly not to a bigger house, but to another country altogether. So we’re forced to take a long, hard, entirely unsentimental look at all the stuff we’ve accumulated over the years.

It’s been painful, wrenching and difficult. The kid pictures that used to adorn the fridge? Gone. Old jewelry we haven’t worn since the Carter administration? Gone. The Ginsu knives purchased at the 1987 State Fair? Trashed (but still able to cut a nickel in half).  Bicycles, furniture, hanging pictures, electronics, books, kitchenware and small appliances? Craigslist, Habitat or parked by the dumpster, but gone.

Part of the challenge has been to pare down our stuff to whatever the airlines allow and can accommodate. We’re moving by air, so if it can’t fly, is too heavy, won’t pass muster at customs, costs too darn much to transport or would end up broken anyway—gone. Buh-bye, stuff!

The exercise has also been a bit humiliating, insofar as the stuff we’re awash in represents so much disposable income, something folks in our soon to be new home don’t, for the most part, enjoy.

We’re relocating to Panama, (yes, the place with the canal, the world’s best shortcut), and folks there don’t have a lot of stuff because they can’t afford it. The concept of disposable income is different in Panama, where the average minimum wage worker receives $252 per month. So another aspect of moving our stuff arises. How do we want to present ourselves to our new Panamanian neighbors? We’ve made a conscious decision to arrive in Panama with very little stuff, just the bare necessities. Whatever those may be, we don’t want to appear, well, stuffy.

It has been difficult to sort out and prioritize the stuff we can part with and that which we cannot bear to get rid of. But taking a long, hard look at our accumulated stuff has been liberating, too. There’s something viscerally satisfying in giving things away, especially when those items are valued by sentiment instead of monetary status.

It was gratifying to see a young couple’s joy at hearing our laughably low price on a full set of bedroom furniture. Gratifying because we were able to let it go to someone who will enjoy it, and who needs it. Gratifying, too, because such generosity over the years seems to have haunted us—by giving us more and more stuff. We think very little of spending for a fine dinner what we received from that young couple for two dressers, a nightstand and a headboard. It’s almost embarrassing.

So the shedding of stuff has been therapeutic, too. And the process has begged the question: Just how much stuff do we really need? Thirty pairs of socks? Really? Twenty shirts? Four suits and a tux? Where did all this stuff come from? What was I thinking, retail therapy? I’m a reasonably happy guy, why would I do that? Did I sleepwalk through Men’s Wearhouse? Win a free hour cruising Sears’ tool department? Do I really need two socket sets, a circular saw, a cordless drill, two sawhorses and a miter box? I live in a townhouse, for pity sakes. So the move has been a kind of minimalist intervention, and a timely one.

The minimalist movement is gaining a lot of traction these days, and attracting a lot of adherents, like the one right here in Cbus. There was even a movie recently based on the minimalism concept, and the film was rescheduled and reshown due to popular demand. It’s not likely for the delectable popcorn; I’m guessing the attraction of minimizing one’s life and holdings is catching on.

A recent article in Huffington Post itemized several of the reasons: the choice to minimize eliminates the ‘suffocation’ all that stuff can cause; ‘right-sizing’ by shedding stuff facilitates a retirement move, (as in our case); the pure joy of decluttering feels so good; the distractions from truly important things that stuff can create.

So this move of ours is not only taking us to warmer climes; it’s ridding us of material attachments as well, allowing us to break free of stuff we thought we owned, but instead owns us. It’s been difficult, but necessary and liberating, like the long-awaited life vest to the drowning person. Drowning’s no fun, or so I’ve heard. Thirty pairs of socks? Really?