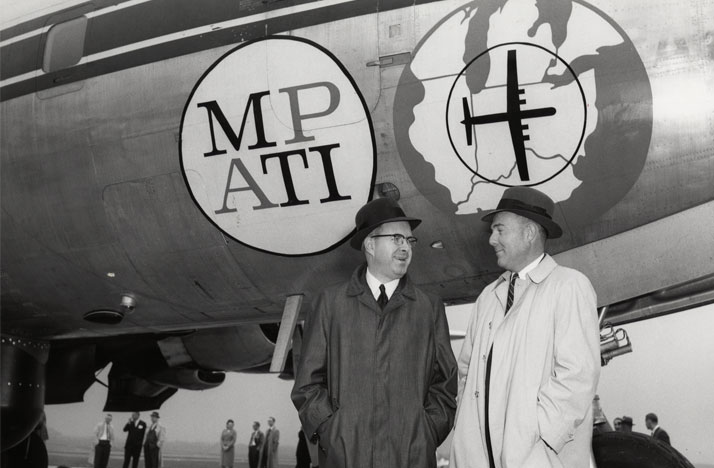 MPATI stood for the Midwest Program on Airborne Television Instruction. Not the best acronym. Probably doomed the whole mission.

The experiment would be considered more than a tad wacky today, but the Midwest Program on Airborne Television Instruction (MPATI) did get a $4.5 million commitment from the Ford Foundation.

In 1961, some educators turned into techie innovators by sending a converted passenger DC-6 into the air to beam educational television programs into schools from 23,000 feet. Serving as a kind of moving, transmission tower, the plane would lower a forty-foot antenna to send signals to classrooms on channels 72 and 76.

It took off daily from Purdue University and flew a figure eight near Montpelier, Indiana transmitting some 200 miles in diameter across six states into the metro areas of Chicago, Detroit and Columbus.

The DC-6 was full to the max with six-and-a half tons of equipment including two television transmitters, two giant reel-to-reel tape recorders, a master control console and a 75 kilowatt generator in the tail. 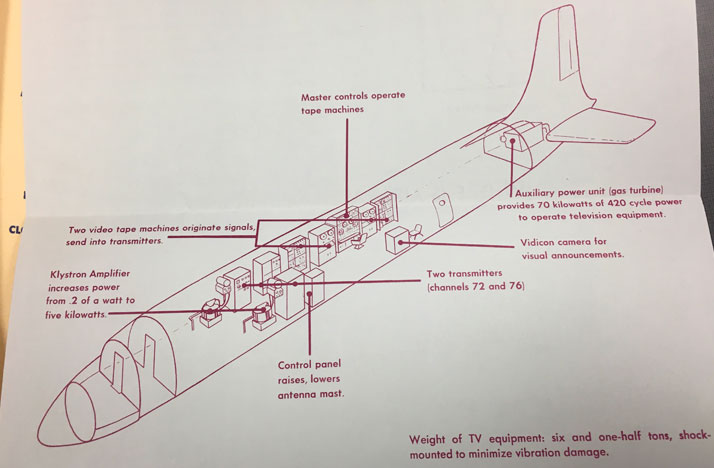 A diagram of the broadcasting on-board a DC-6 that was used for the MPATI in the 1960s.

In Columbus, an “airborne” educational coordinator was tapped and the station churned out short instructional television programs using faculty talent. By 1963, 15 elementary and secondary level TV courses were broadcast on WOSU TV and through the airborne unit out of Purdue.

Among the list of qualities for a good TV teacher according to one of the consultants was the “mouth and teeth should be normal without distracting characteristics” and “do not use too many gestures for emphasis, refrain from bobbing or shaking your head.”

This was well before the days of satellite transmission, so it was exciting to send instructional programs to what was hyped as the “world’s largest classroom.” When the Ford Foundation funding dried up, the flying transmitter in the sky was soon out of business.

At WOSU TV the broadcast school courses, were part of the Ohio School of the Air, would continue into the 1970s.