A New Kind of Conversation

Dialogue is a series of provocative discussions about the most challenging issues facing our community and country held in partnership with Ohio State’s John Glenn College of Public Affairs.

The Affordability of Living in Columbus

Columbus has been an affordable place to live – for most of us. But more and more people are finding it harder to buy or rent a home within their budgets.

Home sale prices are at record highs and outpacing income gains. Apartment buildings are springing up everywhere, but many have rents too high for low-income residents to afford. And with Central Ohio’s population predicted to grow to 3 million by 2050, business and community leaders and housing advocates wonder where the extra half-million people will live.

This Dialogue discussion will focus on Central Ohio’s rapidly changing housing situation and explore what it will take to ensure everyone can afford to live here.

Register Now – This virtual program is free to attend, but advance registration is required.

Support Dialogue and consider purchasing an optional “virtual seat” for $15 to support the Dialogue series. The COVID-19 pandemic has forced abrupt changes upon museums, live performance groups, and other cultural organizations. Some moved operations outdoors, others relied increasingly on technology to connect with patrons, and others shuttered for a time.

When the end of the pandemic is in sight, hopefully cultural organizations will return to ‘normal’ … But what will ‘normal’ look like? How many cultural institutions will survive? How have they adapted? Our guest speakers will discuss the future of patronizing the arts post-COVID.

Dialogue: Columbus – Can We Afford to Live Here? 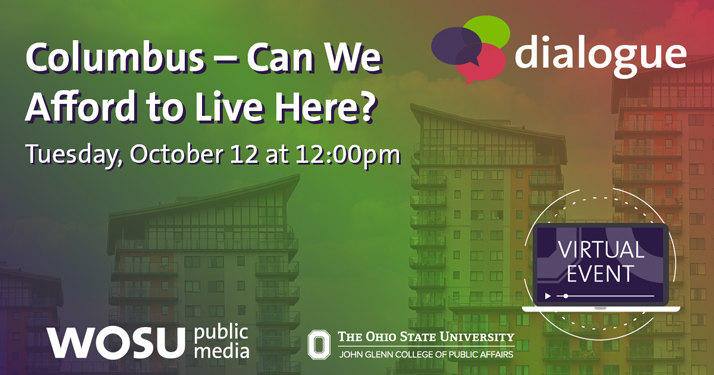 Globally, 2020 was the second hottest year on record as global temperatures increase at an unprecedented rate due to human activity. Here in our corner of the globe, the western US saw intense wildfires and the Atlantic saw so many hurricanes we ran out of names. As climate change progresses, what is the point where we no longer can reverse the damage? Leading climate scientists Lonnie Thompson and Ellen Mosley-Thompson from Ohio State’s Byrd Polar and Climate Research Center discussed the state of climate change with WOSU News Chief Content Director Mike Thompson.

Decades of complaints of police bias and brutality against people of color came to a head in 2020 with the deaths of Breonna Taylor, George Floyd, Casey Goodson and Andre Hill. Demanding change, protesters flooded the streets of downtown Columbus and many suburban city centers. Columbus city officials promised reform and voters approved independent oversight of the police. In our latest Dialogue program, we looked at where those promised reforms stand and examined efforts to heal the divide between the police and people of color. Our panelists for this program were Columbus minster Jeffery Kee, veteran Ohio police officer Angel Tucker and former police chief Kim Jacobs. WOSU News Content Director Mike Thompson moderated the conversation, with 89.7 N PR News Anchor and Host Clare Roth monitoring the Q&A. Watch the program below.

The COVID-19 pandemic forced abrupt changes for students, parents, and educators. The switch to remote learning, increased reliance on technology, and suspension of most standardized tests made the last two school years unforgettable. With the end of the pandemic hopefully in sight, educators are planning for a return to ‘normal.’ But what will the ‘normal’ classroom look like? How can we help students make up for lost time? Joining us for this program were Dr. Talisa Dixon, superintendent of Columbus Public Schools, and Paolo DeMaria, Ohio’s superintendent of public instruction. Trevor Brown, dean of Ohio State’s John Glenn College of Public Affairs, moderated the conversation with WOSU Classroom Chief Content Director Amy Palermo monitoring the Q&A. Watch the program below.

After the ballots have been cast, WOSU Public Media’s Mike Thompson and a panel of experts looked at the aftermath of the 2020 election. They discussed the results, voting process, any legal challenges and how the country will move forward. Steven Huefner, professor at Ohio State’s Moritz College of Law, Former State Legislator Shannon Jones, and Democratic Consultant Derrick Clay joined us for the conversation moderated by WOSU’s Mike Thompson.

The 2020 election will be like none other in recent history. American voters are as divided as they’ve been in decades and a global pandemic is forcing them to cast ballots in different ways. Political divisions and COVID-19 will stress our electoral system like never before. As Ohioans make their choices, we’ll look at what election officials and advocates are doing to make sure our votes count, and the process is secure.

Jen Miller, executive director of the League of Women Voters of Ohio, and Ned Foley, director of Election Law at Ohio State’s Moritz College of Law, joined us for this conversation. Trevor Brown, dean of Ohio State’s John Glenn College of Public Affairs, moderated the discussion.

The COVID-19 pandemic has cast a spotlight on systemic racial inequalities in the American health care system. The coronavirus has affected people of color at a disproportionate rate. While we’re coping with a new virus, it’s not a new problem. African Americans, Hispanics and Native Americans have long suffered worse health effects than White Americans.

Stephanie Hightower, president and CEO of the Columbus Urban League, and Columbus Health Commissioner Dr. Mysheika Roberts joined us to discuss the reasons behind this systemic inequity and explore ways to close the gap. Ann Fisher, host of All Sides with Ann Fisher on 89.7 NPR News moderated the discussion.

No Shot, No School. Should Government Mandate Vaccines?
November 12, 2019

Socialism used to be a dirty word in American politics, but many of the candidates running for president are openly suggesting some socialist policies might be a good thing for America.

We discussed the pros and cons of capitalism and socialism with Rea Hederman, executive director of the Economic Research Center for The Buckeye Institute and Bob Fitrakis, professor of Political Science at Columbus State Community College and co-founder of the Democratic Socialists of America. The event was moderated by Mike Thompson, chief content director of News and Public Affairs for WOSU Public Media.

Disinformation in the Digital Age
September 10, 2019

Disinformation – the purposeful spread of false or misleading information — is an ancient phenomenon but has exploded in recent years thanks to modern technologies including social media. Reality increasingly is being distorted by fake videos, fake people and cries of “fake news.” And it’s getting easier to generate fakes and to spread them instantly and virally.

What are the consequences of the rising tide of disinformation? Can anything be done to fight fakes without endangering our fundamental values including freedom of speech? What will happen if we fail to rein in disinformation?

We will discuss this timely issue with Jeffrey Trimble, a lecturer in the School of Communication and Department of Political Science at Ohio State. Before coming to Ohio State in 2018, Trimble, an international journalist and media manager for more than 35 years, helped to create programs by U.S. government-funded international broadcasting to counter global disinformation from Russia and other countries and non-state actors.

The discussion will be moderated by Nicole Kraft, an award-winning reporter, editor and magazine journalist who is an assistant professor (clinical) of public affairs journalism in Ohio State’s School of Communication. Her areas of expertise include news, sports and feature writing, social media, sports communication, media law and ethics, and academic use of mobile technology.

Dialogue: Basic Income for All – And Other Ways to Close the Income Gap
April 30, 2019

Lightly regulated capitalism leads to boom-bust cycles that threaten the livelihood of the middle class and poor in times of crisis.

Could raising income taxes for the wealthy fund new programs and help reduce income inequality? Could universal basic income combat poverty? Is guaranteed income – a guarantee that all citizens or families have an income sufficient to live on, provided they meet certain conditions – a solution?

We will with Lynn Parramore, senior research analyst at the Institute for New Economic Thinking, and Dr. Darrick Hamilton, executive director of the Kirwan Institute for the Study of Race and Ethnicity discuss these and other policy ideas. Moderated by Dr. Trevor Brown, dean of the John Glenn College of Public Affairs.

Dr. Pete Edwards, co-owner of the Columbus Crew SC, and Gene Smith, director of athletics at The Ohio State University join Ann Fisher, host of All Sides with Ann Fisher on 89.7 NPR News for a discussion of the prominent role sports play in American society.

From billions spent on college athletics and taxpayers footing the bill for arenas and stadiums, to the sports concussion crisis and the ever-expanding issue of sports gambling, we will examine why sports are so important to our culture.

Fifty-seven years after John Glenn became the first American to orbit the earth, the United States finds itself in a world in which many nations, as well as private companies, have established independent space capabilities.

Since the 1970s, workers without college degrees have seen their full-time employment fall, real wages decline and family income stagnate.

J.D. Vance, author of Hillbilly Elegy, and Oren Cass, author of The Once and Future Worker: A Vision for the Renewal of Work in America, discuss American society, economics and public policy.

Mike Thompson, WOSU Public Media’s Chief Content Director for News and Public Affairs and host of WOSU TV’s Columbus on the Record, was joined by Paul Beck, OSU Professor Emeritus of Political Science and Whitney Smith, political consultant & founder, W.T. Smith Consulting, to discuss the results of the 2018 Midterm Elections and what it means for 2019 and beyond.

Ann Fisher, host of All Sides with Ann Fisher on 89.7 NPR News, and Dr. Peter Mansoor, Ohio State Univeristy Chair of Military History and military analyst for CNN, discussed if the “Forever War” will ever end with U.S. military engagement in Iraq, Iran, Afghanistan and extended conflicts in the Middle East. And what this continuing commitment of troops overseas means for national security at home and abroad.

The New Age of Entrepreneurship
March 6, 2018